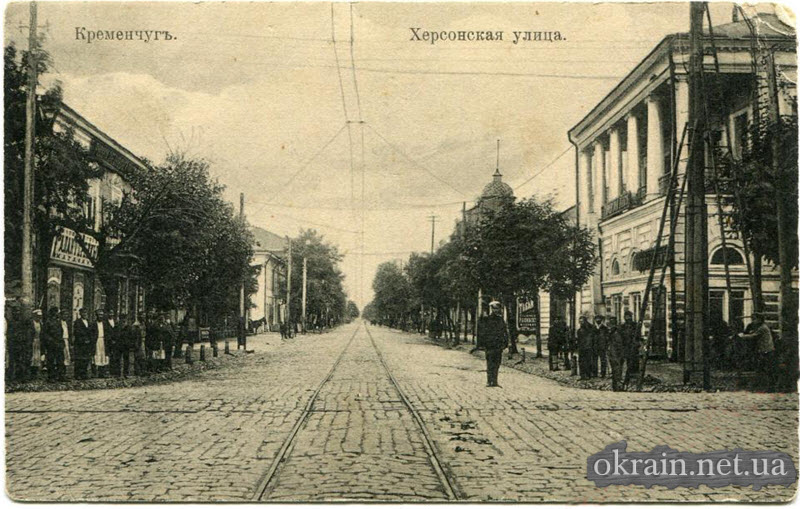 It is located between Pushkin Boulevard and Proletarskaya Street (now Heavenly Hundred). Extends from Vorovsky Street to 1905 Street.

The length of the street is 1100 meters.

The modern street of Lieutenant Pokladov (formerly Karl Marx) – one of the oldest Kremenchuk streets, laid according to the plan of 1774, was the link between the left and right banks of the Dnieper, between Kremenchuk and Kryukov.

It was on this street that the first floating bridge, built-in 1770, went out. The treasury allocated annually from 5 to 7 thousand rubles for its maintenance.

In 1789, provincial institutions were transferred from Kremenchuk to Yekaterinoslav, and soon the Kremenchuk bridge went there too. The crossing again began to be carried out on boats and oaks. Spans, carriages, mail triples, Chumatsky rolls filled the bridge space, waiting for their turn to cross to the right bank. Sometimes merchants stood idle for 3 weeks, incurring huge losses. All this hurt Kremenchuk trade and the city budget.

In 1797, the mayor F.Privalov persuaded the Kremenchuk merchant Voronkov to build a new floating bridge. It consisted of 150 rafts, each raft of 12 logs 10 meters long. For the needs of the crossing, an additional 6 ferries, 6 oaks, and 1 boat were allocated. This bridge served the Kremenchu ​​people faithfully until 1872 when the railway bridge was built.

Probably, the street was originally called Novorossiysk, and after the founding of Kherson and the postal route to it, it received the name of Kherson.

The noise of the crossing, the spring floods of the Dnieper scared away the wealthy Kremenchuzhans from the coastal region. And the poorest citizens settled here. Almost every year their homes were damaged by the Dnieper flood, but after the flood, residents returned to the abandoned nests.

The Great Patriotic War obliterated the entire coastal region. For many years there was a huge wasteland, overgrown with lush weeds, through which the path to the steamboat marinas was trodden. In the mid-1960s, preparing for the 50th anniversary of the Soviet regime, the Jubilee Park was established on the site of the wasteland, and the city beach was improved on the shore.

Therefore, today the street of Lieutenant Pokladov (former Karl Marx) does not begin on the banks of the Dnieper, but on Vorovsky street at the City Palace of Culture. Here, in the quarter between the streets of Pervomaiskaya and Vorovskogo, a fragment of pre-revolutionary building with a continuous facade was preserved: one of the oldest residential buildings of the 20th century (No. 6/24), a merchant’s mansion of the second half of the 19th century (No. 4), with a miraculously surviving arched passage into the courtyard and apartment building for poor tenants (No. 2/23).

Khersonskaya street in the 18th and the first half of the 19th century was not only an important transport route. She played a significant role in the business and commercial life of the city. At the end of the XVIII century, between the modern streets of Pervomaiskaya, Sverdlov, Shevchenko and K. Marx, a huge area for the sale of bulky goods, called Senna, was arranged. At the beginning of the XIX century, in connection with the rapid growth of Kremenchuk, the area is almost in the very center of the city. The transportation and sale of hay, lime and other building materials here became extremely undesirable, so the area was redesigned for retail sales and renamed New Bazarnaya. Dairy shops and a gallery for the sale of baked bread located on the New Bazaar Square overlooked Kherson Street.

Bounded on one side by the river, and on the other by Veselaya Street, Khersonskaya throughout its history did not increase in size, but it was compacted in the building. At the end of the 19th century, it was one of the busiest and most populated streets of Kremenchuk, where 1729 residents lived.

At the beginning of the 20th century, the First Loan and Savings Partnership, the Exchange Committee, and the Commercial and Industrial Exchange Artel open their offices on Khersonskaya Street.

These small credit institutions saw their task in providing cheap loans to medium and small entrepreneurs. Depositors were attracted by the opportunity to get a high percentage on deposits and the fact that deposits were accepted for an unlimited amount, starting from 10 cents.

At this time, Kherson Street turns into one of the cultural centers of the city. Between Catherine and Birzhevaya streets a small square is arranged. In one of the buildings near it opens a bioscope “Star”. And on the corner of Kherson and Birzhevaya streets, there is a miniature theater, wherein 1912 a beginner actor from Odesa L. Utesov appeared. At the end of Kherson Street was the office of the oldest garden institution in Ukraine, K. Baer.

In 1919, Kherson Street was renamed K. Liebknecht Street. During the years of NEP, commercial and entrepreneurial activity on the street noticeably revives. In March 1923, in house number 43 on the second floor, the Kremenchuk Commissioning of the Industrial Bank of the USSR. After Prombank moved to the old building of the State Bank, a children’s consultation occupied this house. 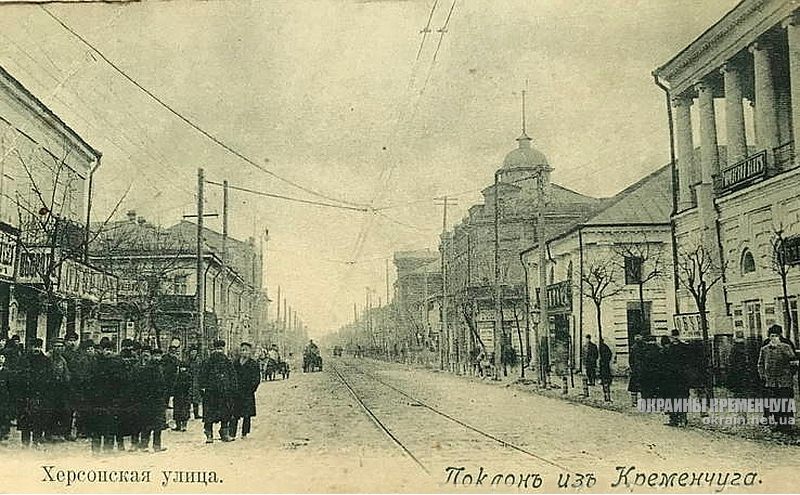 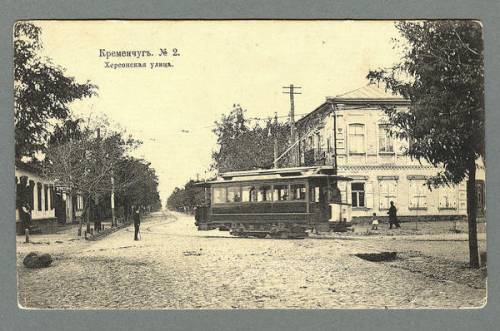 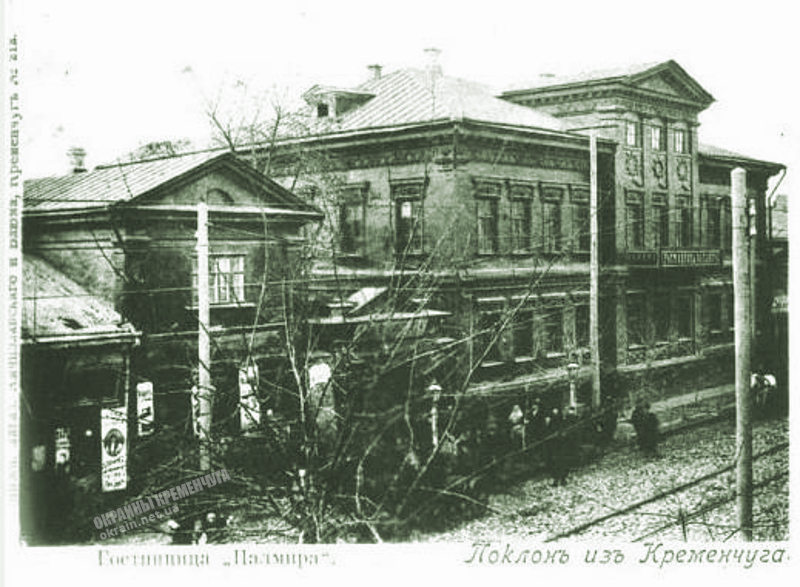 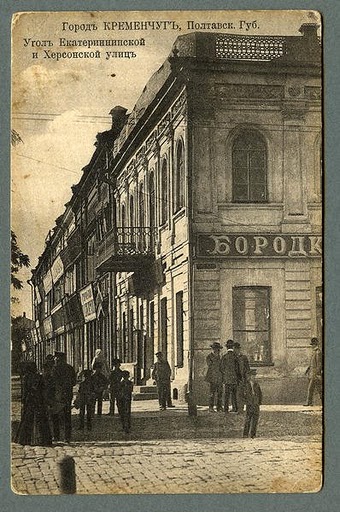 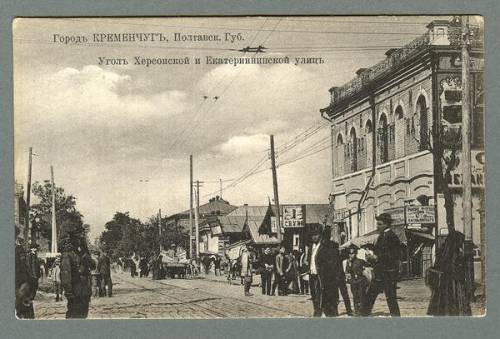 In the autumn of 1923, the Kremenchuk Mutual Credit Accounting and Loan Society, numbering up to 300 people, began its work in house No. 42.

Next to Prombank (house number 45) was the Robmister photo studio.

On the second floor of the Victoria Hotel is the editorial board of the newspaper Our Way.

In connection with the enlargement of the quarters, K. Marx Street (which it began to be called since 1959, after the abolition of the Kryukovsky District Council and the elimination of the same names on the right and left banks of the city) turned out to be divided into several sections.

The post-war development of the city radically changed the character of the street. There are no retail areas, shopping people are noisy on Sundays, important guests do not drive up to the mirrored doors of hotels. Another era, other people. Only old houses keep the memory of the past. Moreover, centuries-old trees at the time of golden autumn throw leave under their feet, like yellowed letters from the past.

Materials of the book “The Streets of the Old Kremenchuk”, A.N. Lushakova, L.I. Evselevsky 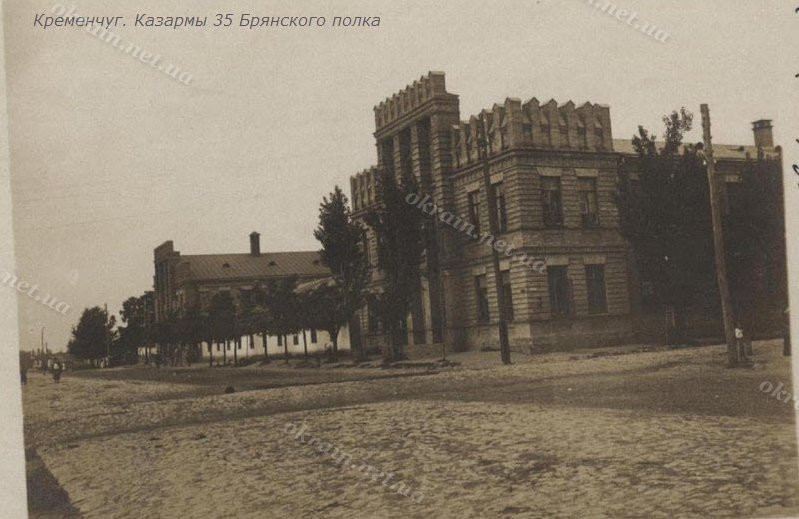 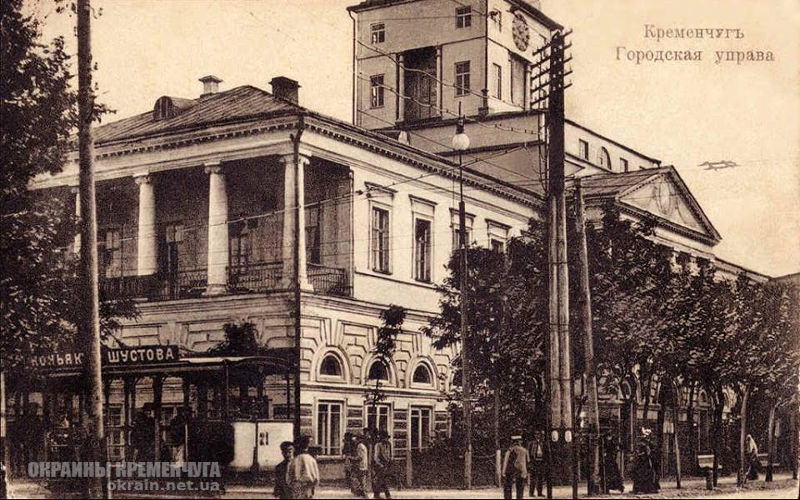