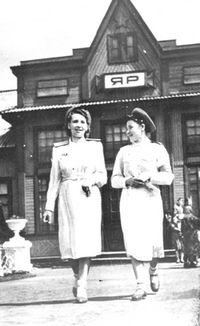 Before the war, there were 500 households in krivush. After the village was burned by the Nazis in September 1943, only 48 remained. In the village, the school, the hut of the village council, collective farm buildings and other buildings burned down. Winter was coming. Luda hastily began to build dugouts from improvised materials, in which they lived for a year, two or more. Autumn was dry and warm. The harvest in 1943 was good. The invaders took the bread from the collective farm (public yard). But the roots remained in the field. The fields with potatoes and beets in the village were dug out mainly by the forces of the military units located along the Dnieper, the Red Army dug all this and used it for food. There were many potatoes in the steppe outside the village of Peschany. For the construction of dugouts, and then huts, a pine grove near the village of Mikhailenkovka was cut down to the root. They also cut wood on the island, and also caught it on the Dnieper from previously broken rafts. Before the war and after the war, a lot of wood from Belarus was rafted down the Dnieper. People mined a lot of building materials in the city from destroyed houses, from abandoned German buildings. A lot and quite a good forest remained from the German artillery depot at the elevator (base), which was mainly dismantled by the population of Reevka, Krivushy.

At the end of October 1943, the leadership of the village and the collective farm announced a mass exit to work on the collective farm to harvest potatoes in the steppe. Allegedly, there should be a person from every yard. My father has already gone to work at the railway station in Kremenchug, Tyt, the policemen and the “Chernoguzes” are buried, and we only rebury soldiers and commanders of the Red Army. I answered him that until the spring of 1944 there was a plywood plate on a peg with data about the buried person on one of the graves, and I quoted them to him (I remembered them then). He said nothing. So these graves were erased and forgotten. I would like to believe that the names of those buried in these graves nevertheless ended up in the list of those who died for the village on the obelisk near the village club, since there are now more names on the lists than were buried in 1945.

In a mass grave under the monument to the liberator soldier in August 1945, 8 dead were reburied, of which one officer was a senior lieutenant, the rest were soldiers and sergeants. But on the occasion of the 50th anniversary of the Victory, 10 more surnames were added to these 8, which are to be conquered there. Now there are 18 Surnames on the monument, one of them is separately engraved on a stainless steel plate. Now it has become impossible to determine the names of the eight reburied and resting in this grave. It is not clear why and by whom it was done? After all, I am one of the living witnesses who were present at the reburial, and I remember well that there were 8 coffins. Near the mass grave on the left and right, by the above date, symbolic graves were made, on which 85 names were engraved, who died near the village in the battles for the Dnieper in 1943.
In addition to the losses of the Red Army, in 1943-1945. 14 civilians were killed. Of these: 3 during shelling, 4 were blown up by mines, 7 teenagers were blown up by careless handling of ammunition and explosive devices. About 6 teenagers and pre-conscripts were injured from inept handling of explosive devices (fingers were torn off, eyesight was damaged, an arm was torn off).
But more significant combat losses of the Red Army on the lands of the village were in 1941: on Tsarina up to a platoon, on Gorislavka, at the collective farm office, 6 or 8 people, on Kovalivka a few people, on the big island there were many dead soldiers. On the territory of the village in the fall of 1941, the Nazis killed several people, starved to death and weakened by our prisoners. This is the price that the freedom and independence of the inhabitants of only one of our villages cost in the Great Patriotic War of 1941-1945.
Time does not stand still, much has changed and continues to change in our lives. The multinational power, the USSR, has disappeared from the world map. Some sons and grandsons of those who, not sparing their lives, saved the world from fascism, are swaggering on the pages of newspapers and on television screens, often pouring streams of mud and lies on the military and military feats of their fathers and grandfathers, who survived and won in that already distant war. But the glory of the winners will not fade in the memory of the grateful descendants of future generations. May their glory be eternal, and their memory be holy.
During the retreat in September 1943, the German invaders blew up all the concrete structures at the elevator and the ammunition that was there. But the ammunition, dispersed over a large fenced area of ​​the Kuchugurs, remained, although they were prepared for the explosion, connected to the wires. Something prevented the Nazis from blowing them up. Therefore, a huge amount of various ammunition, explosives, and gunpowder remained on the kuchugurs. Many of these explosives and ammunition fell into the hands of teenagers who were curious about such things. Some of them were blown up, crippled, died. This is how my younger brother Nikolai, born in 1931, blew himself up and died. On October 10, 1944, he found and dismantled a German 75-mm artillery shell, which exploded and literally “blew” it into small pieces. My mother and I found a piece of his back from him.

ki and left foot, which was buried on the same day in the evening at the Yatsynivsky cemetery. Nikolay grazed a cow at the “Pine” (a small forest), now there is a summer cottage. There, at the edge, near the osokors, he blew himself up.
In October – November 1943, units of the Red Army in the village were located in the surviving huts, across the dam, opposite the club and in the club. Combat positions were equipped along the Dnieper. At night, trench work was carried out with the involvement of the adult rural population (old men and women). Several times the Nazis from the island subjected the village, the remains of farmsteads to artillery and mortar fire, and also fired at the trenches working on the construction, but no one was injured.
In the hut of Nikolai Pavlovich Pugach (1931-1989), several soldiers from Central Asia were stationed. One evening they drank, and one of them sadly sang his national songs until late at night. The next day, Nikolai’s mother told me that one “yatsmen” (natsmen) from evening until late at night “wept so much, wept so much”, “What happened to him that he wept so bitterly?” she wondered. Until 1939, no one was drafted into the Red Army from the republics of Central Asia. There was no radio in the village. Therefore, few people knew the culture and customs of the Central Asian peoples. Here is the mother of Nikolai Pugach and took their songs for crying.
The construction of huts in the village basically began in the summer of 1944. Huts were built exclusively of adobe. The skeleton of the walls of the hut was made, consisting of pillars (sokh), beams, nozzles, crossbars and stakes from thin poles. The space between the stakes was filled with clay and straw. Everyone did all the preparatory work for himself, and emergency work, such as filling the walls with clay (smearing), laying the ceiling was done exclusively collectively (herd). The owner prepared clay, straw, water, prepared food and drink for daubing the hut. On some day people were invited to smear. Usually in a day they tried to lay out the walls and sketch the ceiling. And so in turn they smeared each other – they helped. Clay with straw was kneaded by people with their feet, horses were also used, but more often cows, heifers, bulls.
Since ancient times, in the village, huts (yards) were built exclusively on hills (mounds), because. The Dnieper annually spilled over the beams, and on the hillocks the huts were not flooded with water and did not collapse. Building huts in the beams began only after the construction of the Kremenchug hydroelectric power station.
After the liberation of the village, there were few working bulls (oxen) and horses on the collective farm. For reinforcement, the cows of the villagers were attracted, of which few survived. All the owner’s cows were divided into pairs for work in the yoke. A norm was established for working days for cows in a yoke at collective farm facilities. They carried clay for the construction of a cowshed and other building materials, and harrowed the arable land.
Before the war and especially after the war, despite the fact that Reevka was closer to the city, but due to traditions and family ties, young people from Reevka went to the movies and dances to our village club. There were especially many Rey guys. They came, as a rule, in groups, hooligans, started fights. Malicious hooligans and fighters were tried in a show trial. There were hooligans and fighters, and from among the krivushans, who were also judged, the Reevsky guys acted on the principle: it is better to be the first guy in the village than the last in the city. In the city, they knew that they would be rebuffed, and they were afraid of the police, 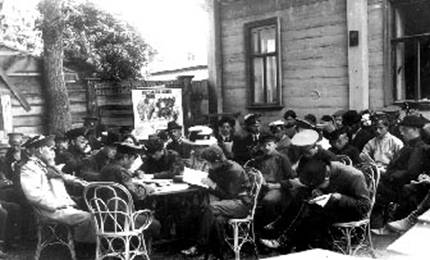 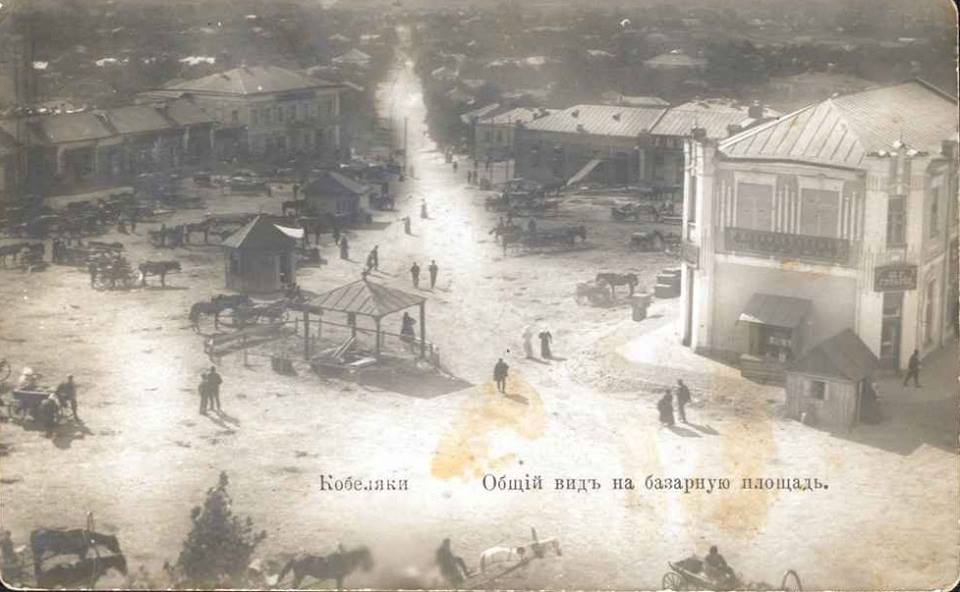