I wondered for a long time about whether to publish this material or not. Opinions remained from the read ambiguous. On the one hand, to discover unimaginable horrors and hardships of that time, massacre of prisoners of war. But after a little reflection, I realized that there was no point in concealing the essence of Nazism, this monstrous, hellish war machine. This must be remembered. The story is twisted in different directions, but the conclusions do each their own.

At the beginning of the second half of September 1941, Soviet prisoners of war began to arrive in the military barracks of the city of Kremenchug, where the 12th battalion and the 7th battery of the Soviet troops were located before the occupation. The German command organized camps for prisoners of war in these places. This territory was enclosed in several rows with barbed wire, on the corners and in large aisles were installed towers for the protection of the camps. The camps contained up to 20 thousand prisoners of war simultaneously.

The barracks that were in the camps could not fully accommodate the entire composition of the prisoners of war, so most of them were placed under the open sky, despite the harsh autumnal cold, and then winter frosts. The internal territory of the camps was divided into 10 blocks; each of these blocks was enclosed with barbed wire, where the Germans placed several prisoners of war of those who were not placed in the barracks.

The food of the prisoners of war did not provide even a hungry existence, and the new arrivals did not feed at all for several days, thereby bringing them to complete exhaustion.

Tsymbalist Ivan Vasilyevich, as a former prisoner of war of the camp, told us: they fed us buckwheat flour along with the peel, this flour was put in bowls and filled with water, sometimes boiled, and sometimes given unboiled.

This Burda, which the prisoners called balanda, was given half a liter per day. They gave food and sour, which caused poisoning. Many prisoners of war could not withstand such power and died. So we were fed in the camp from October to November, and then began to give half a liter of balanda from burnt rye. This mass was a kind of fuel oil. Subsequently began to give about 150-200 grams.

As a result of malnutrition, on the basis of exhaustion, typhus, dysentery and other infectious diseases raged in the camps. Mortality from wasting and epidemic diseases was very high, and in the winter of 1942 up to 300 people per day. In addition, dozens of people died every day in the camps from torture, exhaustion, and beatings.

There was no end to the torture in the camps, this is what the former prisoner of war, Zhivolup Yakov Grigorievich, tells about this: “Around December 1941, the chief medical officer of the German prisoners of war Orland, in severe frost, built up to 30 prisoners of war, including 21 qualified doctors, most of these are of Jewish nationality:

and others whose names I do not remember. All of them were stripped down to their underwear and forced to dig a hole. After the pit was dug, Orland ordered the sewage from the dressing room to be brought into it and ordered the prisoners of war to bathe in them, after which he gave the command to shoot them. ”

Zhvania Taras Konstantinovich, as a former prisoner of war, recalled that in February 1942, this camp doctor Orlyand ordered a doctor to be brought to his office from among the prisoners of war by the name of Bulachnik, where he had beaten him, mocked him. and then ordered the soldiers to shoot. After that, the boulder was pulled out of the Orlanda office and was shot dead before the eyes of the prisoners of war. Including shot another 14 doctors of prisoners of war. The German physician Schulke was present during the execution.

Zimbalist Ivan Vasilyevich, as a former prisoner of war recalled:

“Around March 1942 to our camp“ B ”from p. Kremeevka, Gradizhsky district brought 70-80 wounded prisoners of war, including commanders, lieutenant colonels, captains, lieutenants and two associate professors – Taylor from the Rostov Medical Institute and Hecker – associate professor Filatov. Both comrades, as doctors were highly qualified, but that did not save them. A few days later they were all shot and dumped in a common pit behind the warehouse of the camp. There were 15 officers in total. I personally saw from the hospital window how they were stripped and driven to the place of execution. The shooting was attended by doctors – Schulke, Doryug and Orland. Those doomed to death were brought to the pit, two were held by the hands, and the third one shot at the back of the head with a revolver. ”

Kharidze Vasily Grigorievich, a resident of the city of Kremenchug told:

“On August 19, 1941, I was captured and subsequently sent to a prisoner of war camp in the city of Kremenchug, located in the Mirror Factory, where we were up to 1,500 people.

The commandant of the camp at that time was the German Hans.

All of us Germans used terribly hard work, this is the construction of a wooden bridge across the Dnieper River, where up to 3,000 people worked. Working conditions were hard labor. It was necessary to work from dark to dark. We were dressed and shod in rags, since the Germans were taking off our good uniforms, and in exchange they were given rags, and wooden shoes on their feet.

Meals were given a bad and very limited amount, 300 grams. bread and balanda from frozen, unwashed beetroot and water. housing conditions were also difficult. they lived in barracks in which the windows were broken, the doors did not pretend because of a malfunction, and there was a strong overflow.

During my time in the camps, i.e. About 2 months, from cold, hunger, beating and overwork, about 700 prisoners of war died. There was such a case: while working on building a bridge, one prisoner of war decided to warm up near the stove, for which the Germans wanted to throw him alive in the fire, but when he began to ask him to save his life, they forced him to pull the carriage with an overwhelming load and beat him with iron shovels, beaten so that he lost consciousness. “

Borodina camp cleaner Maria Iosifovna told us that the prisoners of war were kept in mud, cold and hunger, and were placed to capacity to fill the barracks. In the barracks were arranged three tiered bunks with a narrow passage among them. In 1943, the interfloor overlap collapsed due to an overload in one of the barracks, and as a result, over 300 prisoners of war were killed and about the same number was seriously injured. I was an eyewitness, as the Germans each morning took out several wagons from the camps of dead prisoners of war who died of starvation and various diseases.

According to official data of the city hospital, 171 people from among the prisoners of war, frostbitten in the camps in the winter of 1942-1943, were amputated by the arms and legs.

The Germans, as mentioned above, carried out periodic mass executions of prisoners of war.

“That as a translator in the camps, starting in December 1941 and ending in March 1943, I was an eyewitness to such facts, when in the camps from 70 to 170 people died daily from starvation and epidemic diseases. In addition, the Germans daily brought up to 200 prisoners of war in the camps, on some days up to 200 people. ”

Maria Kulischenko recalled that in the winter of 1942 she saw how the Germans shot 50 prisoners of war, who were stripped to their underwear.

The Germans shot prisoners of war not only in certain places, but executions and beatings were carried out everywhere, in front of the inhabitants of the city, at work and especially during the hauls from one camp to another.

It was enough for an emaciated or sick prisoner to be a few steps behind the general column during the hauls; .

An eyewitness of these atrocities Kiseleva Maria Mikhailovna told:

“In October 1941, a large group of prisoners of war was being driven along Lenin Street, one of them was Uzbek by nationality, or the Tatar lost power and could not walk, began to lag behind the column. The German officer who accompanied the convoy seized him and dragged him along the street; the residents of the city, after seeing this picture, began to ask the officer to throw the prisoner of war, but he did not pay attention to the requests of the people. Having dragged 300 meters, he threw it and ordered two German soldiers to take this prisoner to the gardens and shoot him. “

Soon there was a case when a group of prisoners of war was being chased along the same street of Lenin, one of the women threw several cucumbers and one of the prisoners of war wanted to pick up a cucumber, but only he leaned over the shot and he was killed by the German who accompanied the convoy.

Near the territory of camp No. 346-A, within the cemetery, 11 pits of graves were found, in which up to 30,000 prisoners of war were buried.

On the territory of the Sandy Mountain in the North-Eastern outskirts of the city of Kremenchug, 36 pit-graves were found, where up to 20,000 civilians and up to 5,000 prisoners of war were buried.

1. A copy of the commission act of November 29, 1943, about the committed acts of the German fascist invaders and their accomplices during the temporary occupation from September 9, 1941 to September 29, 1943 in the city of Kremenchug.

Chairman of the Executive Committee of the City Council – Budny Alexander Alekseevich,

The head of the Gorotdel NKVD – Captain Shishlov Fedor Emelyanovich,

Photos from the Kremenchug Museum of History and Local Lore 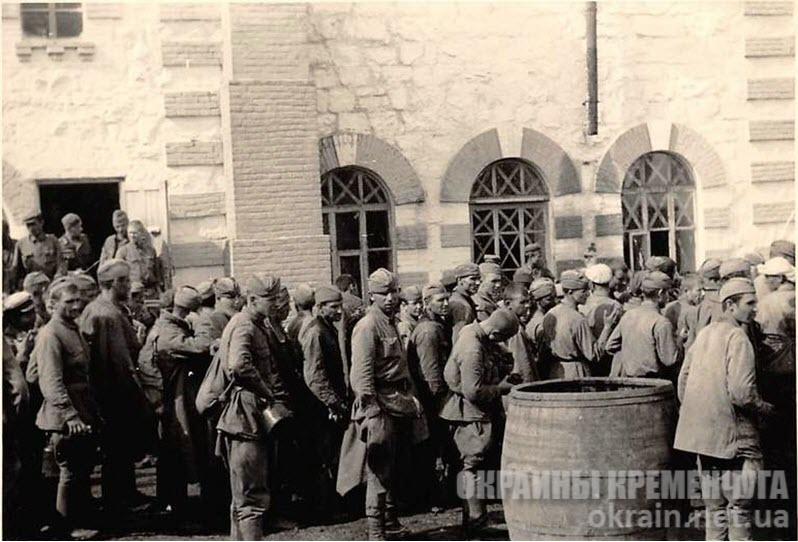